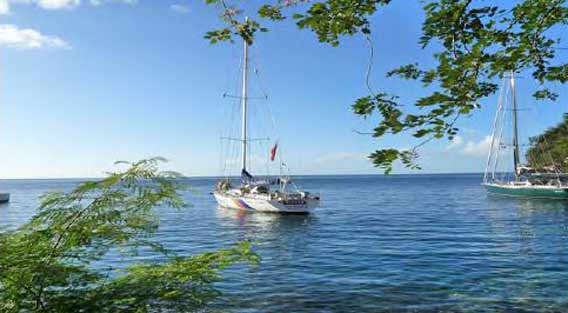 The Blake sponsored, Challenge of a Lifetime yacht is now on it's way back across the Atlantic Ocean! Raising money for St Margaret's Hospice, the yacht has sailed around the Atlantic and is now on it's journey home, stopping in the Azores and Cork before heading back to Portsmouth.

So our voyage is done.  The long months of fund raising and anticipation are at an end.

Our last full day at sea saw us motor sailing under reduced sail as the last of the chop and swell from the stormy weather in the open Atlantic finally gave way to the benign seas more associated with that well known weather pattern for this area, the Azores High.

We were busy all morning, flaking and bagging sails, stowing lines, cleaning fenders, tidying up the sail locker in readiness for our arrival as well as a good clean of the deep bilges with mops and buckets!  After lunch we had an opportunity to relax and enjoyed afternoon tea on deck making short work of Darren’s marvellous Madeira cake.

Late yesterday afternoon saw our first sight of land for nine days.  The small volcanic island of Pico was some sixty miles to our north yet clearly visible beyond our natural horizon.  First sight of our final destination San Miguel was had early this morning and we are now safely alongside in the marina at Ponta Delgada.

With just some time to clean the boat, have a look round the island and have a farewell meal ashore with the Challenger 2’s sea staff; Steve, Darren, James and Hayley we will soon be on our way home.

Our thanks must go to the sea staff for their good care and company during the last three weeks.

With every good wish to all at St. Margaret’s.

From  Lisa, Rob and Colin

Today’s light winds and only having a storm trysail have made sailing impossible and much motoring has resulted.  This gave us an opportunity to take down the torn main sail ready for its trip to the sail makers on our arrival, as well as getting other preparations for land fall out of the way early.

We are now only about 250 Nm away from our destination with one last night left at sea.  One of the uniquely special experiences of long distance passage making are the sights, sounds and sensations of night sailing.  On sailing from the Bahamas we have been accompanied throughout our night watches by the moon, first as a full moon which has gradually waned on each night of our passage until last night when it became a mere crescent moon.  As each night became darker than the previous the Milky Way steadily revealed its true splendour.  It was a very welcome companion during these night watches only to be chased away by the sun’s first rays of the new day.

Throughout the stormy few nights however, the night sky was an inky black with no discernible horizon or other visual clues by which to steer.  In these conditions the sensation felt by the helmsman was of being drawn faster and faster into a black hole with each successive gust.  Our companions on these occasions were the spume thrown up from the hull and the sparkling phosphorescence of the plankton as we crashed through the confused seas.  In some ways this was just as magical as the peaceful, twinkling stars of calmer nights.  Each sensation quite different but both will leave a lasting impression on our memories.

Since our last update the weather has taken a turn for the worse. Building steadily from late Tuesday the winds have reached force 9 gusting to force 11 and very rough seas. Overnight last night there was a lot of rain to compound the issue. Despite this bucking bronco ride we are on, we are all in good spirits and enjoyed James’s improvised beef curry last night for tea. Some 900 plus miles gone and with now just under 1000 to go we can soon begin to feel that it is all downhill to the Azores, so to speak.

Currently we need to make good an average speed of 6.5 – 7.0 knots to arrive in The Azores by Friday the 20th.  The winds remain quite variable and as a result we are having to spend several hours under engine while waiting for the favourable winds to kick in once again.

Tuesday was affine clear day which gave most of us some time to relax.  Steve and Darren organised a wonderful chicken BBQ with just an oven and a blow torch.  The culinary masterpieces are likely to come to an end soon as our fresh provisions will soon be at an end but it was good while it lasted.

Darren was the winner of yesterday’s Great Atlantic Bake Off challenge with some delicious if oddly shaped fairy cakes with icing and sprinkled with hundreds and thousands.

Last night was the coldest so far and a busy night for all with an impromptu sail change at 03:00 and work in the engine fuel filters at 04:30.

We are now 546 Nm into our passage and our next update is planned for Friday when we should be just under the half way point.

Under sail again, and 217 of the 1946nm to the Azores under our belts already.

The Extra day allowed more exploration of Bermuda, despite being a bit overcast and windy for much of the day.

The wind is a bit fickle and we have had to turn the engine on for periods to keep the speed we need to ensure we arrive ahead of the flight departures!!

Sighted sea birds and more flying fish but not so far the whales which Lisa is longing to see.

Rob and James made delicious burgers for lunch today and Darren is trying his hand at fishing, so we are all waiting to see what is on the menu tonight.

Having practiced my astro nav I have now located us in the correct ocean…. Practice makes perfect.

That’s all for now folks next update in 2 days.

The end of our first week on board saw us sailing in fine conditions towards Bermuda.  We made landfall early on Friday morning in the very tranquil and picturesque old town of St. Georges before it had truly woken up for the day.

After a good clean up of the boat and the crew alike it was time to go exploring.  Rob hired a moped and headed off to find the far corners of the island while Lisa and Colin went for a swim at Tiger Bay just over the hill from St. Georges before taking a stroll back through the narrow streets and brightly painted houses of the old town which dates back to the 17th century.

Our planned sailing for today (Saturday) has been delayed due to strong winds which prevent us moving safely to the fuel and water berth, so the current plan is to await tomorrow’s better weather.

Rob sends this message to Pat and Keith Garland; alive, well and missing you both.  Rob sends Happy Birthday wishes to Olivia and Sara as does Colin to his wife Sheila.

Less than 24 hours after arriving in The Bahamas Lisa, Rob and Colin plus sea staff Steve, Darren, Haley and James set sail for Bermuda. After a bouncy first 24 hours we have all found our sea legs, thanks goodness. Sailing under a full moon at night has been a great help to pass the night watch. Last night we were visited by some flying fish with one landing next to Lisa and giving her quite the surprise. Baked bread and cakes as the sun rose this morning and anticipating a brief stopover on Friday in Bermuda if the current weather forecast holds good.